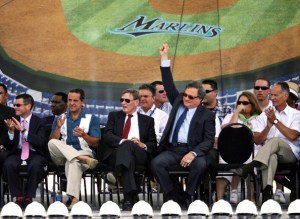 Earl Santee, AIA, Senior Principal of POPULOUS gave one of the most “WOW” presentations ever of AIA Ft Lauderdale’s seminars! AMAZING! Huge “WOW” factor! The presentation’s background music of playing on the field made us FEEL like we were having a great time with hotdogs, frozen drinks, basking in lots of sunshine and rooting for the Marlins way up in the stands! LET’s GO!

The show was briefly organized and right to the point via keywording.

Mr. Santee began the lecture on portraying the new Stadium as an “artful environment about place, game and experience.” He emphasized architectural concepts of region, figure/ground relationship, site location and re-introduction of city, streets, and blocks. Via color coded graphic images, he graphically showed the ballpark’s connection to major bodies of water while capturing the downtown feel, sustainably, so no alienation will be whatsoever.

Santee also portrayed the Stadium as an “urban gallery” between the Everglades and Atlantic Ocean. Dramatically, images were shown of the overhead expansive glass roof which would allow 3 different planes to retract from each other as “merging forms”. The function of the roof would amazingly extend out to create an “exterior” shelter for pre and post “gathering” events of the game. The “exterior” environment of tropical lushness would be “pushed in” towards the Stadium, originated as an “outfield”. Multi-functionality plays a dominant role in this project.

The floor plan was cleverly devised and diligently construed as a “means of wayfinding” via colored signage, tinted glazing and other interior elements. Four main colors, blue, red, green, yellow, control the layout of architectural elements built within the ballpark.

Kudos to Earl Santee and to his firm, Populous on an excellent job in creating a “fast-forward” concept of ballparks while considering traditional, long-term effects of ballpark design in the world of sporting venues.

I agree with Mr. Santee on the comment: “Baseball is trendy yet smart.” YES, IT IS!!